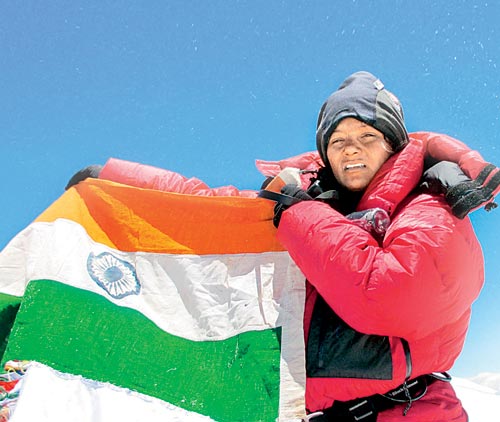 She lost her leg when a group of thugs pushed her from a moving train.

Aarunima Sinha was born in Ambedkar Nagar near Lucknow in Uttar Pradesh. Her father was an engineer in Indian Army and her mother was a supervisor in health department. She had an elder sister and a younger brother. Her father passed away when she was 3 and her sister's husband started to take care of her family.

Arunima liked cycling, football and also was a national volleyball player. She wanted to join paramilitary forces. She got a call letter from CISF and faced her life changing accident while travelling to Delhi in its response.

Sinha, a former national volleyball and football player,[10] boarded the Padmavati Express train at Lucknow for Delhi on 12 April 2011, to take an examination to join the CISF. She was pushed out of a general coach of the train by robbers wanting to snatch her bag and gold chain. Recounting the incident, she said:

"I resisted and they pushed me out of the train. I could not move. I remember seeing a train coming towards me. I tried getting up. By then, the train had run over my leg. I don't remember anything after that."

Immediately, as she fell on the railway track, another train on a parallel track crushed her leg below the knee. She was rushed to the hospital with serious leg and pelvic injuries, and lost her leg after doctors amputated it to save her life.

She was offered compensation of 25,000 (US$360) by the Indian Sports Ministry. Following national outrage, the Minister of State for Youth Affairs and Sports Ajay Maken announced an additional Rs. ₹200,000 (US$2,900) compensation as medical relief, together with a recommendation for a job in the CISF. Indian Railways also offered her a job.

On 18 April 2011, she was brought to the All India Institute of Medical Sciences for further treatment, spending four months at the Institute. She was provided a prosthetic leg free of cost by a private Delhi-based Indian company.

An inquiry by the police into the incident threw her version of the accident into doubt. According to the police, she was either attempting suicide or met with an accident while crossing the railway tracks. Arunima claimed that the police were lying. Contrary to the police claims the Lucknow bench of Allahabad high court ordered Indian Railways to pay a compensation of ₹500,000 (US$7,200) to Arunima Sinha. 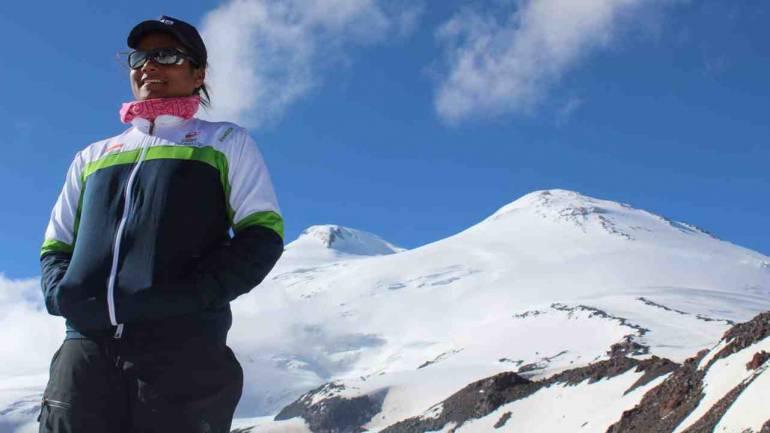 While still being treated in the All India Institute of Medical Sciences, she resolved to climb Mount Everest.She was inspired by cricketer Yuvraj Singh (who had successfully battled cancer) and other television shows, "to do something" with her life. She excelled in the basic mountaineering course from the Nehru Institute of Mountaineering, Uttarkashi, and was encouraged by her elder brother Omprakash to climb Everest. She climbed Mt Everest with a prosthetic leg, which was arranged by raising funds with the help of a swami of Ramakrishna Mission, Vadodara.

She contacted Bachendri Pal, the first Indian woman to climb Mount Everest, in 2011 by telephone and signed up for training under her at the Uttarkashi camp of the Tata Steel Adventure Foundation (TSAF) 2012.

Sinha climbed Island Peak (6150 metres) in 2012 as preparation for her ascent of Everest.

Sinha and Susan Mahout, a USAF instructor, who had together climbed Mount Chaser Sangria (6,622 meters or 21,726 feet) in 2012 under the guidance of Hendrick Pal started their ascent of Mount Everest.After a hard toil of 17 hours, Sinha reached the summit of Mount Everest at 10:55 am on 21 May 2013, as part of the Tata Group-sponsored Eco Everest Expedition,becoming the first female amputee to scale Everest.She took 52 days to reach the summit.She wrote a small message thanking the Almighty on a wrapped cloth and pressed it in the snow. Recounting the incident, she said:

"It was my tribute to Shankara Bhagawan, and Swami Vivekananda who has been an inspiration throughout my life."

Utter Pradesh then-incumbent chief minister Akhilesh Yadav honored Arunima sinha and handed over two cheques for an amount of Rs. 25 lakh in a function organised at her residence in Lucknow. This included a cheque of Rs. 20 lakh from the state government and a cheque of Rs. 5 crore on behalf of the Samajwadi Party. Chief minister said Sinha by her hard work and determination had climbed the Mount Everest and created history. She was congratulated by the Indian Sports Minister Jitendra Singh on her achievement.

Arunima Sinha is now dedicated towards social welfare and wants to open a free sports academy for the poor and differently abled people. She is donating all the financial aids she is getting through awards and seminars for the same cause. The academy would be named Shaheed Chandra Shekhar Vikalang Khel Academy.

She wrote the book "Born again on the mountain", launched by Prime minister of India Narendra Modi in December 2014.

She was awarded Padma Shri, the fourth highest civilian award of India, in 2015. She was Awarded Tenzing Norgay Highest Mountaineering Award in India same as Arjun Award.